On August 12, 2020, in Budapest, Hungarian Defense Minister Tibor Benko and US Ambassador to Hungary David Kornstein signed a preliminary agreement (Declaration of intent) regarding Hungary's acquisition in the United States under the American Foreign Military Sales (FMS) program. anti-aircraft guided missiles of the Raytheon AMRAAM family for the planned purchase by Hungary of the US-Norwegian NASAMS anti-aircraft missile system. The cost of this purchase of missiles from the United States, according to the agreement, will be about $ 1 billion.

Hungary's intention to acquire a NASAMS ground-based anti-aircraft missile system produced by the consortium of the American corporation Raytheon Technologies and the Norwegian group Kongsberg became known in February 2019, and the total purchase price was then estimated at about $ 1 billion. Judging by the known data, Hungary chose a mixed scheme for purchasing NASAMS air defense systems (performed, apparently, by NASAMS 3), with the acquisition of ground-based elements of the system (including launchers and included in the Raytheon AN / MPQ-64F1 Sentinel radar system) directly from the consortium Raytheon and Kongsberg, and the anti-aircraft missiles AMRAAM and AMRAAM-ER produced by Raytheon - by intergovernmental agreement with the United States within the framework of the American FMS mechanism. Previously, it was precisely this scheme for the purchase of air defense systems by NASAMS that Qatar, in particular, resorted to.

In August 2019, the US Department of Defense's Defense Security Cooperation Agency (DSCA) sent a notice to the US Congress of a planned upcoming sale to Hungary under the US FMS 180 program of standard air-to-air medium-range missiles Raytheon AIM-120C- 7 AMRAAM with a total estimated cost of $ 500 million for use as anti-aircraft missiles as part of the NASAMS air defense missile system acquired by Hungary.

In May 2020, DSCA issued another notice of the planned upcoming sale to Hungary through FMS for use in NASAMS air defense systems, as well as 60 special Raytheon AIM-120C-7 / C-8 AMRAAM-ER anti-aircraft missiles with an estimated cost of $ 230 million. will also include four training missiles SATM-120C AMRAAM-ER, related equipment and services for technical support and training.

Apparently, the now signed agreement of intent covers the purchase of AMRAAM and AMRAAM-ER anti-aircraft missiles by Hungary, although the exact number of missiles purchased as a result has not yet been reported.

Earlier it was reported that the Norwegian government threatened to block the sale of NASAMS air defense systems to Hungary due to disagreements over the management of Norway's financial investments in Hungary through EU funds. In addition, in June, the Hungarian media reported that the Hungarian government, for political reasons, is ready to abandon the purchase of NASAMS air defense systems and, in return, is negotiating with the Germans on the purchase of air defense systems produced by the German branch of the European association MBDA (presumably, TLVS systems with IRIS-T SL missiles). However, in the end, the will of the new "elder brother" was stronger.

NASAMS medium-range air defense systems (originally Norwegian Advanced Surface to Air Missile System, now stands for National Advanced Surface to Air Missile System), was jointly developed and produced by the Norwegian Kongsberg group (acting as the air defense system integrator) and the American corporation Raytheon Technologies. The system is based on a combination of the AN / MPQ-64F1 Sentinel radar and the use of air-to-air missiles with active radar homing of the AIM-120 AMRAAM family as missiles. The firing range of the system in the modern NASAMS 2 configuration using AIM-120C AMRAAM missiles is up to 25 km, and the height reach is up to 14-15 km.

Initially, the NASAMS system was created in the interests of the Norwegian armed forces, and is currently in service in Norway and in small numbers in the United States (where this air defense system has been used for Washington's air defense since 2004). The system has also been acquired by the Netherlands, Spain, Chile, Finland, Oman, Lithuania, Indonesia and Qatar, and is slated for purchase by Australia and India. 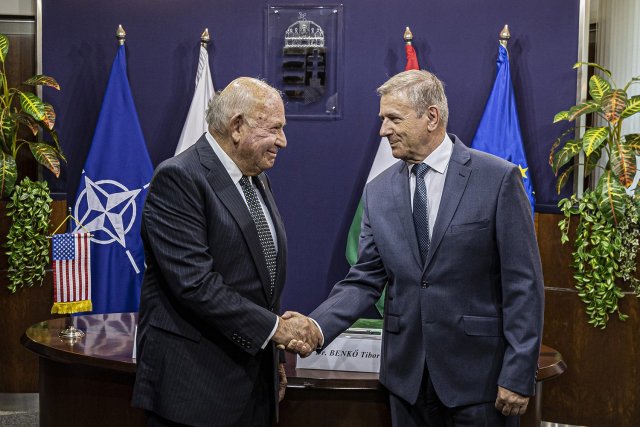 US Ambassador to Hungary David Kornstein and Hungarian Defense Minister Tibor Benko sign a preliminary agreement (Declaration of intent) regarding Hungary's acquisition of the US Foreign Military Sales (FMS) anti-aircraft guided missiles of the Raytheon AMRAAM family in the United States for the planned purchase by Hungary of the US-Norwegian NASAMS anti-aircraft missile system. Budapest, 12.08.2020 (c) László Kertész / Hungarian Ministry of Defense.